Many of us feel deep regard for our favorite cars, but few can match the commitment Jim Ratcliffe has shown to one of his. The CEO of the INEOS chemical company and one of the U.K.'s richest men, Ratcliffe mourned the passing of the previous-generation Land Rover Defender so much that he ordered the creation of a new car very obviously inspired by it. And, being British, he named it after the pub where the idea was hatched: The Grenadier.

Getting the automotive Grenadier to near-launch status has involved a legal battle with Jaguar Land Rover over the right to build something with such an obvious visual relationship to the classic Defender, plus the sort of heavy-duty check writing that will fatigue even a billionaire's wrist. Magna Steyr engineered the Grenadier in Austria. It will use a BMW inline-six engine and is set to be built in what was, until recently, a Daimler factory—the Hambach plant in France that was originally created to build the Smart Fortwo. 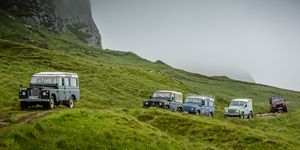 We Drive Every Generation of Land Rover Defender

Having spent what was reportedly a nine-figure sum refitting Hambach to produce the Mercedes-Benz EQA and EQB, Daimler chose to switch production of the compact EVs to Hungary. Thus, INEOS was able to acquire what was effectively a brand-new facility equipped with line robots still in their delivery packaging. INEOS will continue to produce the tiny Fortwo EV for several years as part of the deal. (The sight of Fortwo EVs and pilot-build Grenadiers passing through the final inspection area together is an incongruous one.)

The Grenadier is deliberately old-fashioned. While the new Defender has moved to an independent suspension and is targeted at affluent lifestyle-focused buyers, the Grenadier is aimed at those who expect fewer concessions from their SUVs—i.e., more utility than sport. As such it features body-on-frame construction, live axles at both ends, and a two-speed transfer case as standard, together with a locking center differential. Electronically locking front and rear diffs will be optional, but the Grenadier doesn't get adjustable drive modes like Land Rover's Terrain Response system, nor height-adjustable air springs or adaptive dampers. This is intended to be a tough, simple vehicle capable of life in the true wilderness; the closest current U.S.-market alternative is the Jeep Wrangler.

Touring the gleaming Hambach plant confirms that the Grenadier will be a very different car from the one that inspired it. The old Defender was built in a dark, dingy part of Land Rover's Solihull factory to tolerances which could be politely described as highly variable. The Grenadier line feels more like an operating room, with body shells scanned to confirm accuracy at better than 1 millimeter. Despite the external similarities, the new car is substantially different beneath the surface. A peek inside the front fenders reveals an intricate structure that provides the deformation necessary to allow their distinctive flat tops to satisfy pedestrian impact standards.

The Grenadier's engine compartment also looks very well filled by the BMW-sourced engine. INEOS will be offering both gasoline and diesel turbo sixes displacing 3.0 liters, although only the gas version is planned for States. It makes 281 horsepower and 332 pound-feet of torque and is paired with an eight-speed ZF automatic. A manual transmission option would have been more in keeping with the spirit of the Grenadier but was deemed too expensive to develop.

Our drive was limited to a well-worn pre-production prototype on a course made up entirely of gelatinous mud—the spoil heap of a former French coal mine. The entire experience was conducted in low range, with the highest speed attained a modest 16 mph. The prototype also lacked the electronically locking front and rear differentials or the traction control that the finished car will have.

The Grenadier's cabin feels more spacious than the cramped accommodations of the old Defender, and although most of the prototype's switchgear wasn't working, the dashboard has a pleasingly utilitarian design—the button layout on the central and roof consoles bears a strong resemblance to the CRM114 Discriminator panel from the classic movie Dr. Strangelove. A single central display screen relays all driving information; what looks like a secondary digital instrument pack in front of the steering wheel just houses warning lights. The powertrain's origin is made obvious by the familiar bulbous design of the BMW gear selector, although the transfer case is managed by a separate mechanical lever next to it.

The off-road courses created for media events are usually carefully designed to show off a car's talents without running the risk of getting stuck. Not here. The Grenadier bogged down several times during our drive, although never so badly that it couldn't extract itself and then conquer the obstacle given more speed or improved technique. The prototype felt like a hard-used test mule, its transmission clunking and bigger accelerator inputs sometimes causing the engine to hesitate. But the basics are certainly promising, with the gas pedal weighted to give gentle initial responses well suited to off-road driving and the engine having plenty of midrange brawn to keep moving through the sapping mud.

While the lack of electronic adjustments is intended to be part of the Grenadier's core appeal—there is less to go wrong in tough environments—it will require some adjustment for those who've grown accustomed to the various modes prevalent in modern high-end SUVs. And there is no option to raise the ride height of the suspension (ground clearance is 10.4 inches). The Grenadier doesn't even have hill-descent control, which has become nearly standard among today's off-roaders.

For many potential customers that back-to-basics approach will be a key part of the Grenadier's appeal, and it does give an unarguable connection to the vehicle that inspired it. We suspect that the finished version is going to feel much more like the classic Defender than the new Land Rover Defender does. The other unanswered question is where it will be positioned in the market when it hopes to go on sale in the U.S. next year. We suspect the old-fashioned driving experience won't be matched by an equally old-fashioned price, with reports hinting at the range starting around $75,000.