• An excellent example of the Aston Martin V8 Vantage, the bulldog from Gaydon, is up for sale on Bring a Trailer in an auction that ends on March 18.

• Its bite comes from a 4.7-liter V-8 with 430 horsepower and 346 pound-feet of torque, and its bark is enough to scare Cerberus. The six-speed manual seals the deal, absolving the sins of a deft yet unforgiving chassis.

• This Meteor Silver over Chestnut Tan California roadster with just 29,000 miles has had a pre-purchase inspection and comes with a partial service history and clean title.

Beauty, hedonism, and nostalgia, daubed with masochism, compel my Bring a Trailer pick of the day, a 2014 Aston Martin V8 Vantage roadster. The auction site—which, like Car and Driver, is part of Hearst Autos—is accepting bids until Friday, March 18. In its 16-year life span, various trims in the compact, entry-level Vantage lineup have earned gold stars or wooden spoons as the best and worst of 21st-century Aston Martin. Yet it's never been boring, and even at its worst, like pizza and . . . other things, it's still rather good.

The beauty and hedonism are self-evident. Just look at this car.

As for nostalgia, this job requires repeated jaunts to the world's most tempting locales to measure up the industry's finest fruit. Eventually, one numbs to luxury, more indifferent to Michelin stars than Michelin tires, prone to exclamations like, "Oh no—not Marbella again."

Any work trip that pierces one's insensate hide is special, and I've been on a few. But every trip involving an Aston Martin has been superlative.

I drove a DB9 Sport Pack from England to France's Champagne region, and then to Le Mans to watch the carmaker wage a successful 24-hour fight to win its class. I took a DBS to England's National Motor Museum to see the James Bond movie-car exhibit, then got waylaid between hedgerows by a mule. A friend and I took a Rapide from Munich to St. Moritz for a long weekend plying Alpine passes.

And before all that, there was my first international press launch, the 2007 V8 Vantage roadster drive. We bivouacked in a castle perched over a valley in the South of France. I made a bosom pal. We were served truffle-infused meals every day, three times a day, washed down with truffle wine. I still avoid truffles 15 years later.

As for the V8 Vantage, it was sent to do an impossible job: challenge the Porsche 911. It failed, same as every such challenger, but the Aston Martin failed sensationally, with incredible looks, old-school English cosseting and character, dynamic chops, exclusivity (perhaps to an unintended extent), and an exhaust wail better than Rogaine to make one hirsute. 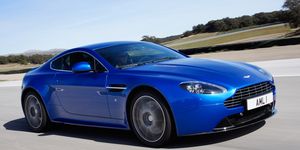 By 2014, though, development budgets less lavish than the products were turning old-school into an anachronism. The infotainment system needed to be euthanized. Mechanical noises, especially from the rough-shifting SportShift II seven-speed automated manual, went bump in the day and the night. The chassis wasn't merely stiff; it refused to yield. Every long drive ended at an orthopedist.

Hence the masochism, because we'd still take this one right here. The 420-hp 4.7-liter V-8 is always ready to stir the pot. The proper six-speed manual eliminates the compromises of the SportShift. The roadster would still "gallop through corners with confident handling, slack-free controls," same as we said in 2007. And the droptop brings all ears closer to that chorus of dual-pipe demons.

No OEM offering of the day was as brutish and pampering as the V8 Vantage, and there will never be another like it.